Terence and Christy support the ministry of Sei-ai Gakusha (a collection of Christian preschools/community education centers) and serve with Nishi-Kunitachi Church of God.

Christy felt called to full-time ministry during her junior year of high school. She enrolled in Anderson University, where her first missions experience was through a Tri-S trip. In 1992 Christy found herself at the Missionary Board of the Church of God, trusting that God would send her where she needed to be. This turned out to be Japan, where she served as a special assignment missionary, teaching English in a high school and working with a Church of God congregation.

Terence grew up in a Christian home in Western Canada. At a missions festival in his first year of college, he came forward during a call for people who wanted to commit themselves to go into missions, but the decision remained quietly in the back of his mind for some time. After graduating in 1993, he went to Japan to teach English, where he met Christy.

They married in 1996. The following year they returned to the United States, where Christy attended Anderson University School of Theology. They returned to Japan as SAMs from 2000 to 2003, where they had a teaching ministry in western Tokyo with students ranging from preschool age through adults. In addition, they helped support a local Church of God congregation.

In 2003, they returned to the US where Christy directed a child care center and they both served as lay leaders in Southwest Ohio. In 2006, the family moved to Birmingham, Alabama, where Christy served in full-time ministry as a pastor at Riverchase Community Church. In 2009, they returned to Japan for nine weeks, working in their previous position in western Tokyo. After that experience they could no longer deny that God had more work for them to do in Japan.

They returned to Japan in January of 2011 and took up their previous teaching and ministry position. 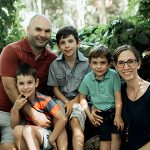