Norberto currently serves in a national leadership capacity in the church, overseeing the training of pastors and church leaders, pursuing church planting, and shepherding the pastors in Paraguay. Norberto also serves as professor in several Bible schools.

Paraguay is called the heart of South America, yet very few people could readily point to it on a map. It is one of the least evangelized countries in Latin America. According to Latin America Mission (LAM), only 3 percent of Paraguay is evangelical. One reason for this is Paraguay’s thirty-five-year dictatorship that ended in 1989. Paraguay continues to be plagued by governmental corruption and spiritual blindness.

For Norberto, the mission field is not new since he grew up as a missionary kid in Argentina and Paraguay. And he is the grandson of missionaries as well. Today, he is serving as the national leader of the Church of God in Paraguay, having been elected in 2016 for a two year term.

He came to Anderson University for undergraduate and graduate studies, where he met Julie. They both felt called to missions before they met. Once married, they knew they needed to prepare themselves for an exciting journey. Shortly after finishing seminary, they decided to put their education into intercultural practice. They decided to drive to South America from Anderson, Indiana, to experience God at work in Latin America. It was an exceptional adventure! They arrived in Paraguay on November 9, 2002, sixty days later, without a hitch.

Norberto and Julie served as directors of Radio Alternativa, a radio station in southern Paraguay owned by the Church of God. It was the only Christian radio in the state of Itapua, not only offering quality Christian programming but also organizing marriage retreats, children’s camps, conferences, and concerts to evangelize and disciple people in their relationship with Christ.

On April 18, 2012, Julie and their son Timothy were tragically killed in a car crash, leaving behind Norberto and their newly adopted daughter Anahi.

In 2015 Norberto married Nancy, a Paraguayan of Ukrainian descent. They recently relocated to Encarnacion. Norberto and Nancy along with their children Mark, Nicole, Anahi, and baby Dominick are adjusting to a new life together and making new memories. 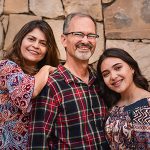 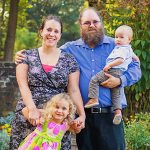